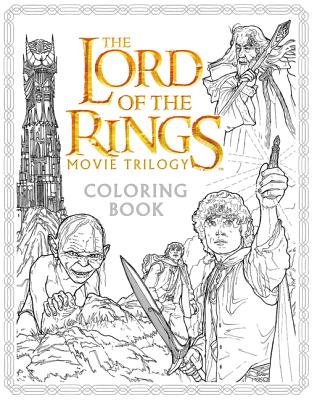 Experience your favorite characters and enchanted scenes from one of the most famous fantasy worlds every created—Middle-earth—in a brilliant new way with this first authorized coloring book based on the Academy Award-winning epic motion picture trilogy The Lord of the Rings directed by Peter Jackson.

The groundbreaking, award-winning The Lord of the Rings film trilogy directed by Peter Jackson brought J.R.R. Tolkien's magical world of Middle-earth radiantly to life for millions worldwide. Now, fans can explore this enchanted universe as never before with the official The Lord of the Rings Movie Trilogy Coloring Book.

Embark on your own coloring adventure through the lands of Middle-earth, from the grim landscape of Mordor to the majestic realms of Minas Tirith and Rivendell, from the Fellowship's frightening journey through the mines of Moria to the Battle of Pelennor Fields. The Lord of the Rings Movie Trilogy Coloring Book is packed with black-and-white line illustrations-all breathtaking in detail-that showcase favorite characters, including Gandalf, Aragorn, Legolas, Frodo, Sam, and Gollum, as well as iconic creatures such as the tree-like Ents, the fearsome Balrog and the hideous Shelob. This companion book also features some of the unforgettable props used in the films, such as the One Ring, Frodo's sword Sting, and Arwen's beautiful Evenstar.

The line drawings in The Lord of the Rings Movie Trilogy Coloring Book are printed on heavy stock paper that absorb colors and prevents them from bleeding through no matter which medium-paint, marker, pen, pencil, or crayon-you choose. Whether you want to color each image true to life or prefer to add your own imaginative flourish, the choice is up to you!

An exciting, artistic journey through Middle-earth, The Lord of the Rings Movie Trilogy Coloring Book is ideal for dedicated Rings fans, coloring enthusiasts, and anyone looking for a few hours of creative fun.

John Ronald Reuel Tolkien (1892-1973) was a major scholar of the English language, specializing in Old and Middle English. Twice Professor of Anglo-Saxon (Old English) at the University of Oxford, he also wrote a number of stories, including most famously The Hobbit (1937) and The Lord of the Rings (1954-1955), which are set in a pre-historic era in an invented version of the world which he called by the Middle English name of Middle-earth.