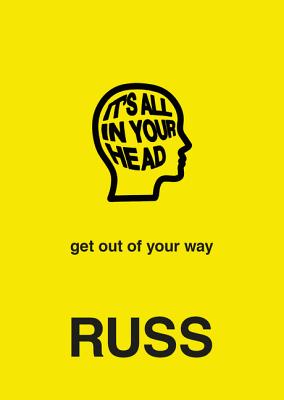 An inspirational book by self-made musical superstar, Russ, reminding you that it starts with YOU, to believe in yourself, and to get out of your own way.

Twenty-seven-year-old rapper, songwriter, and producer Russ walks his own path, at his own pace. By doing so, he proved that he didn’t need a major label to surpass over a billion streams on Spotify/Apple Music, get on Forbes’ 2019 “30 Under 30,” make the Forbes‘ “30 Under 30 Cash Kings” at number 20 for most earned, sell out arenas across the U.S. and around the globe, and become one of the most popular and engaged rappers right now. His method was simple: love and believe in yourself absolutely and work hard no matter what. In this memoir, Russ inspires readers to walk to their individual rhythms and beat their biggest obstacles: themselves.

With chapters named after his most powerful and popular songs, IT'S ALL IN YOUR HEAD will reflect on the lessons he’s learned from his career, family, and relationships. He’ll push readers to bet on themselves, take those leaps of faith, and recognize struggles as opportunities. With illustrations throughout consistent with the brand Russ has built and his fan base loves, IT'S ALL IN YOUR HEAD will give readers an inside-look at the man and the motivation behind the music. A lover of books like The Alchemist and The Seven Spiritual Laws of Success, Russ delivers a short, potent, inspirational, raw, and honest book that gives readers a way to find self-belief and unlock their potential. Fans already rely on Russ as an inspiration of confidence; now, he is taking it to the next level with this book, which will contain lyrics from his music and visuals that reflect his inimitable style.

Russ is a 27-year-old multi-platinum rapper, songwriter, and producer. He initially rose to fame by releasing a song a week independently for two years. His debut album, There’s Really a Wolf, was certified Platinum in 2018 with 15 million singles sold, and was recognized on the 2018 Forbes Hip-Hop Cash Kings list. Russ now headlines sold-out arenas around the world, and his songs have surpassed 4 billion + streams worldwide.