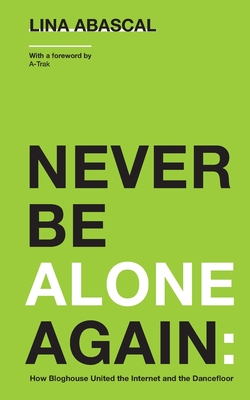 "This book is essential" - A-Trak, DJ/Producer "This writing and these stories don't ache for the past as much as they contextualize how the present is still being made by what was left behind by recent horizons that still echo." - Hanif Abdurraqib, New York Times Bestselling Author Whether you called it electro, indie dance, or were too busy scouring the internet for MP3s to care about a genre name, NEVER BE ALONE AGAIN: How Bloghouse United the Internet and the Dancefloor connects the disparate parts of an under-documented era in the first book focused on the musical and cultural phenomenon called bloghouse. For a brief period in the mid-2000s, a network of independent music bloggers and fans merged the digital and physical worlds in a never-before-seen way. Their punk-inspired DIY ethos elevated noname DJs, music producers, and parties to a level of international success that was quickly eclipsed by corporatized EDM and the music festival boom. But before that, for a moment, there was bloghouse. NEVER BE ALONE AGAIN: How Bloghouse United the Internet and the Dancefloor chronicles the rise of the DJ-slash-It Girl, roaming party photography, illegal Mp3 file sharing, canonical scene reports of bloghouse capitals Los Angeles and Paris, the overlooked impact of suburban Latino communities on nightlife, Kanye West's contribution to the movement, and the slow death of the blog itself.With a foreword from DJ/producer A-Trak, the highly anticipated new book features over 50 original interviews with DJs, cultural icons, and industry insiders, including A-TRAK, Acid Girls, Bag Raiders, The Cobrasnake, The Bloody Beetroots, The Cool Kids, Chromeo, Crookers, Does It Offend You, Yeah?, Flosstradamus, Franki Chan, Girl Talk, The Hood Internet, The Hype Machine, The Knocks, Myspace Music, MSTRKRFT, Nick Catchdubs, Paul Devro, The Presets, The Rapture, Simian Mobile Disco, Spank Rock, Steve Aoki, Van She Tech, and many more.