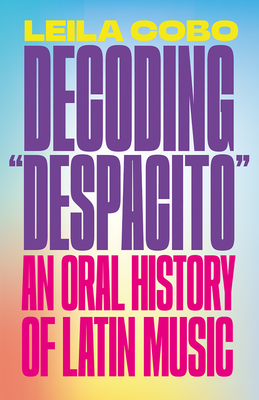 A behind the scenes look at the music that is currently the soundtrack of the globe, reported on and written by Leila Cobo, Billboard's VP of Latin Music and the world's ultimate authority on popular Latin music.

Decoding "Despacito" tracks the stories behind the biggest Latin hits of the past fifty years. From the salsa born and bred in the streets of New York City, to Puerto Rican reggaetón and bilingual chart-toppers, this rich oral history is a veritable treasure trove of never-before heard anecdotes and insight from a who's who of Latin music artists, executives, observers, and players. Their stories, told in their own words, take you inside the hits, to the inner sanctum of the creative minds behind the tracks that have defined eras and become hallmarks of history.

Leila Cobo is the vice president and Latin industry lead at Billboard and heads the Billboard Latin Music Conference. She has published two novels and three books about Latin music, including a top-selling biography of the late Jenni Rivera.

“An up-tempo journey through some of Latin music’s greatest hits. . . . The narrative is rapidly paced, just like the music that fills its pages, and is best served while playing the songs it chronicles. At its core, this is a book about believing in what many considered impossible: “It’s too much Spanish,” said American radio programmers about the titular megahit, which demonstrates the power of music to change attitudes. There is something special about learning the magic of this music from the people who were there and how seemingly niche sounds like salsa, which began in the streets of New York City in the 1960s, would end up resonating in places as far-flung as Japan. The organizer and host of Billboard’s annual Latin Music Conference, Cobo is a highly knowledgeable guide, and she delves deep into the canon to make a convincing case for Latin music as a significant driver of American culture at large. An entertaining oral history of the songs that put Latin culture on the map.”
—Kirkus Reviews