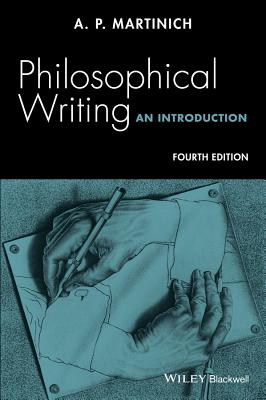 By Martinich
Email or call for price.

Philosophical Writing: An Introduction, 4th Edition, features numerous updates and revisions to A. P. Martinich's best-selling text that instructs beginning philosophy students on how to craft a well-written philosophical essay.

A. P. Martinich is Roy Allison Vaughan Centennial Professor in Philosophy and Professor of History and Government at the University of Texas at Austin. His publications include The Two Gods of Leviathan (1992) and Hobbes: A Biography (1999); and, as co-editor, A Companion to Analytic Philosophy (Blackwell, 2001), Analytic Philosophy, 2nd ed. (Wiley Blackwell, 2012), and The Philosophy of Language, 6th ed. (2013). Martinich is also Vice-President of the Board of Directors of the Journal of the History of Philosophy. Martinich has also contributed to ​The Philosophers' Magazine and Think.