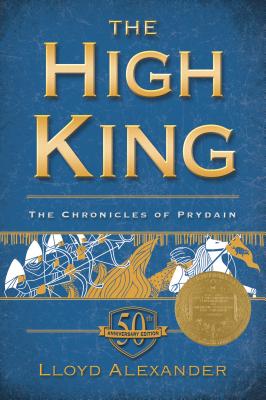 By Lloyd Alexander
Email or call for price.
Out of Print

This is book number 5 in the The Chronicles of Prydain series.

This is the 50th Anniversary Edition of Lloyd Alexander's classic The High King, the final book in the Chronicles of Prydain. Whether readers are already familiar with the series or new to it, they won't be able to resist this beautiful special edition filled with bonus material and a new introduction.

In this riveting conclusion to the classic series from Lloyd Alexander, three faithful friends face the ultimate war between good and evil.

When the most powerful weapon in the land of Prydain falls into the hands of Arawn, Lord of the Land of Death, Taran and Prince Gwydion rally an army to stand up to the dark forces.

The companions' last and greatest quest is also their most perilous. The biting cold of winter is upon them, adding to the danger they already face. Their journey, fraught with battle and bloodshed, ends at the very portal of Arawn's stronghold. There, Taran is faced with the most crucial decision of his life.

Winner of the 1969 Newbery Medal

About The Chronicles of Prydain:

Since The Book of Three was first published in 1964, young readers have been enthralled by the adventures of Taran the Assistant Pig-keeper and his quest to become a hero. Taran is joined by an engaging cast of characters that includes Eilonwy, the strong-willed and sharp-tongued princess; Fflewddur Fflam, the hyperbole-prone bard; the ever-faithful Gurgi; and the curmudgeonly Doli—all of whom become involved in an epic struggle between good and evil that shapes the fate of the legendary land of Prydain.

Released over a period of five years, Lloyd Alexander's beautifully written tales not only captured children's imaginations but also garnered the highest critical praise. The Black Cauldron was a Newbery Honor Book, and the final volume in the chronicles, The High King, crowned the series by winning the Newbery Medal for "the most distinguished contribution to American literature for children."

Henry Holt is proud to present this classic series to a new generation of young readers. Jackets have been handsomely redesigned while retaining the original art of Caldecott Medal-winning artist Evaline Ness. Each retypeset volume now includes a pronunciation guide prepared by Lloyd Alexander. A companion book of short stories, The Foundling and Other Tales of Prydain, is also available in hardcover for the first time in twenty years.

In their more than thirty years in print, the Chronicles of Prydain have become the standard of excellence in fantasy literature for children.

“Greater, more disastrous, and demanding more courage are the battles into which Taran leads his followers against Arawn Death-Lord.... The book has the philosophical depth and overtones of great fantasy.” —The Horn Book

“The last may be the best.” —Kirkus Reviews