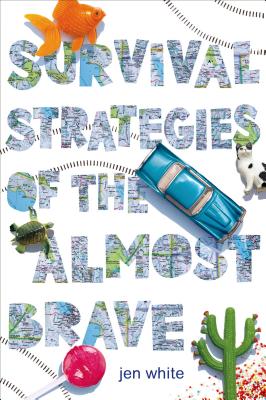 After their mother's recent death, twelve-year-old Liberty and her eight-year-old sister, Billie, are sent to live with their father, who they haven't seen since they were very young. Things are great at first; the girls are so excited to get to know their father - a photographer who, for the summer, is travelling around in an RV. But soon, the pressure of parenthood becomes too much for him, and he abandons the girls at the Jiffy Company Gas Station.

Instead of waiting for someone to come to their rescue, Liberty takes matters into her own hands. On the sisters' journey to get home, they encounter a menacing gas station attendant, a heavily tattooed trucker, a kid obsessed with Star Wars, a woman who lives with many very usual pets, and a host of other characters.

When all seems lost, they get some help from an unlikely source, and end up learning that sometimes you have to get a little bit lost to be found.

Jen White is the author of Survival Strategies of the Almost Brave. She holds an M.F.A. in writing for children and young adults from Vermont College of Fine Arts. She lives in San Clemente, California, with her family.