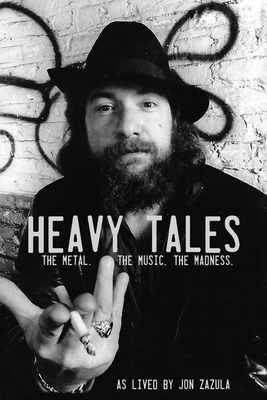 Heavy Tales is the detailed, never before told story as lived by Jonny Zazula of how he founded Megaforce Records out of a flea market in New Jersey with his wife, Marsha and built a dynasty unmatched by others, forever changing the scope of Heavy Metal. The bands they worked with would go on to release some of the most prolific and important albums in heavy metal history, giving it its Golden Era.

Jonny Zazula was a renegade youth who went from living on the New York City streets, to later working on Wall Street, and then moving unexpectedly towards the music business. In the winter of 1982, while working in a flea market, he received an unexpected demo tape from underground, unsigned band Metallica. Eager and determined to have the music heard by the entire world, Jonny Z and Marsha founded Megaforce Records in 1983, and soon after released Metallica's debut album, Kill 'Em All. Through this release Megaforce had cemented its position as the de-facto music label in America for Heavy Metal - but that's just the start.

Heavy Tales details the stories of how Jonny Z worked miracles by managing and releasing albums by Metallica, Anthrax, Testament, Mercyful Fate, Raven, Overkill, Exciter, Stormtroopers of Death, Method of Destruction, Ace Frehley, King's X, Ministry, Mindfunk, Nudeswirl, Warren Haynes, Disco Biscuits and others, and how one night in 1984, he jokingly created Rap Metal before anyone else conceived the idea.

With the foreword written by Chuck Billy, plus over 100 rare photographs unearthed from the MegaVault and photographer friends, Heavy Tales is the definitive American story of a family man with a dream, determined to prove to the world that heavy metal belonged on the stage, on the radio and in your living room.