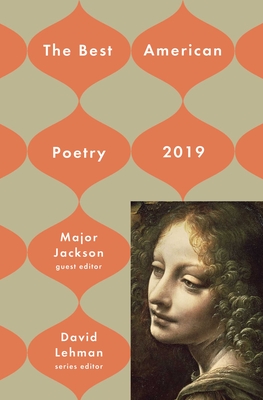 The 2019 edition of The Best American Poetry—“one of the mainstays of the poetry publication world” (Academy of American Poets)—now guest edited by Major Jackson, award-winning poet and poetry editor of the Harvard Review.

Since 1988, The Best American Poetry has been the leading anthology of contemporary American poetry. The Washington Post said of the 2017 edition, “The poems...have a wonderful cohesion and flow, as if each contributes to a larger narrative about life today…While readers may question some of the selections—an annual sport with this series—most will find much that resonates, including the insightful author notes at the back of the anthology.”

The state of the world has inspired many to write poetry, and to read it—to share all the rage, beauty, and every other thing under the sun in the way that only poetry can. Now the foremost anthology of contemporary American poetry returns, guest edited by Major Jackson, the poet and editor who, “makes poems that rumble and rock” (poet Dorianne Laux). This brilliant 2019 edition includes some of the year’s most defining, striking, and innovative poems and poets.

David Lehman, the series editor of The Best American Poetry, is also the editor of The Oxford Book of American Poetry. His eleven books of poetry include Playlist, Poems in the Manner Of, New and Selected Poems, When a Woman Loves a Man, and  The Daily Mirror. The most recent of his many nonfiction books is One Hundred Autobiographies  A Memoir. He lives in New York City and Ithaca, New York.

Major Jackson is the author of five books of poetry including the forthcoming collection The Absurd Man (Norton: 2020), Roll Deep (Norton: 2015), Holding Company (Norton: 2010), Hoops(Norton: 2006) and Leaving Saturn (University of Georgia: 2002), finalist of a National Book Critics Circle Award and winner of the Cave Canem Poetry Prize for a first book of poems. He is the editor of Library of America’s Countee Cullen: Collected Poems. A recipient of fellowships from the Guggenheim Foundation, the National Endowment for the Arts, and the Radcliffe Institute for Advanced Study at Harvard University, Major Jackson has been awarded a Pushcart Prize, a Whiting Writers’ Award, and has been honored by the Pew Fellowship in the Arts and the Witter Bynner Foundation in conjunction with the Library of Congress. He has published poems and essays in Agni, American Poetry Review, The New Yorker, Orion Magazine, Paris Review, Ploughshares, and World Literature Today. Major Jackson lives in South Burlington, Vermont, where he is the Richard A. Dennis Professor of English at the University of Vermont. He serves as the Poetry Editor of The Harvard Review.

"A 'best' anthology that really lives up to its title."
— Chicago Tribune

"Each year, a vivid snapshot of what a distinguished poet finds exciting, fresh and memorable: and over the years, as good a comprehensive overview of contem-porary poetry as there can be."
— Robert Pinsky

"The Best American Poetry series has become one of the mainstays of the poetry publication world. For each volume, a guest editor is enlisted to cull the collective output of large and small literary journals published that year to select 75 of the year’s 'best' poems. The guest editor is also asked to write an introduction to the collection, and the anthologies would be indispensable for these essays alone; combined with [David] Lehman’s'state-of-poetry' forewords and the guest editors’ introductions, these anthologies seem to capture the zeitgeist of the current attitudes in American poetry.”
— Academy of American Poets